For an update regarding the Newton Lake Project, please visit:
http://www.ccmua.org/index.php/newton-lake-water-quality-project/ 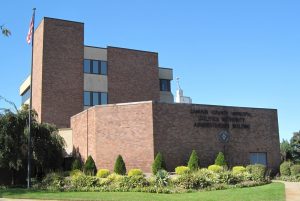 The County Regional Wastewater Treatment System treats the sewage discharged every day from properties in Camden County. The Camden County MUA treats 58 million gallons (220 million liters) of sewage per day at our plant, the Delaware No. 1 Water Pollution Control Facility. This flow travels through 135 miles (215 kilometers) of pipe assisted by 27 pump stations. The CCMUA was required to construct these facilities by the United States Environmental Protection Agency to bring Camden County into compliance with the Federal Clean Water Act.

Camden County is located in the southwestern portion of New Jersey, across the Delaware River from Philadelphia. Burlington, Atlantic, and Gloucester Counties border Camden County on the north, east, and south. The County is 226 square miles in area, with a population of about 500,000. There are thirty-seven municipalities in Camden County.

The northwestern part of Camden County (including 32 municipalities) is part of the Delaware Basin, where water flows into the Delaware River by way of the Big Timber Creek, the Cooper River, Newton Creek, and the Pennsauken Creek. This part of the County is densely populated and urban and/or industrial. Camden City, the county seat, is located at the northwestern tip of the County.

The southeastern area, containing five municipalities, is included in the Atlantic Basin, draining into the Atlantic Ocean by the Mullica River and the Great Egg Harbor River. This section is much more rural than the Delaware Basin. A large fraction of the Atlantic Basin section is within the Pinelands Preserve. The Pinelands Preserve is a million-acre forested expanse of New Jersey where development is highly restricted to preserve environmentally sensitive areas.

Before the Regional Wastewater Treatment System was constructed, 45 million gallons (170 million liters) per day of inadequately treated sewage was discharged into the lakes and streams of Camden County. Local municipal treatment plants, some 50 years old, were handling more flow than they were designed for.

The CCMUA constructed a regional collection system and modern treatment facilities to replace the outmoded municipal systems. These facilities cost $850 million dollars to plan, design, and construct. The project costs have been audited by federal, state, and county authorities. The costs are divided among all the users of the system and billed to each user quarterly. 70% of our budget pays for the debt service (or mortgage) on these U.S.E.P.A. required wastewater facilities. The quarterly sewer service bill sent by our Authority pays for the facilities constructed to treat the sewage from users’ properties. 93% of our operating revenue comes from collection of the quarterly sewer bill. Each municipality in Camden County has a Local Wastewater Treatment System which transports sewage from local properties to the Regional System. The towns have incorporated the charge for their service in local taxes, or send residents a bill directly for their service. The charge for the Local System is not included in the amount paid to our Authority for the Regional System.

Before the regional system went into operation, Camden County’s surface water and drinking water were threatened by pollution. The public health of our citizens was jeopardized by water borne diseases. In fact, the State of New Jersey ranked Camden County’s wastewater treatment system as the number one environmental protection priority in the state.

Pollution of local waterways was reduced by 90 – 95 % (as measured by the bacteria count) after the Regional Wastewater Facility began operation. The Authority also made repairs to Camden’s and Gloucester City’s sewer system. This has halted the discharge of 7 million gallons (26 million liters) per day of raw sewage into the Delaware River. Completed in 2014, the Atlantic Basin Interceptor Project has expanded sewer capacity in the municipalities of Berlin Borough, Berlin Township, Chesilhurst, Pine Hill, Waterford Township and Winslow Township. In 2015, CCMUA completed a project funded by the New Jersey Environmental Infrastructure Trust to capture the solids from all of the combined sewer outfalls in Camden County, which are designed to release flows in the sewer system that exceed capacity when stormwater enters the older city sewer systems.  The solids capture project results in the capture and removal of 30 tons of solids per year that used to go into the Delaware River, Cooper River, and Newton Creek.

By providing proper wastewater treatment, and returning a cleaned effluent back to the Delaware River, our streams and rivers are once again being environmentally restored to be enjoyed by the residents, fish, and wildlife of Camden County. Proper wastewater treatment is a very serious public health issue and we are proud of the service we provide.